How to Wake up Android Phone with Volume Button & ADB

Power and volume keys are the most used hardware components in smartphones and tablets. Too much use, misuse, or accidental drop or exposure to water can make these buttons non-functional. There have been cases when the users weren’t able to unlock their Android phones because the Power key stopped functioning. It’s in such situations that waking up an Android phone with the volume button, ADB command (adb shell input keyevent), or an app might be a lifesaver.

Recently, I wrote a very detailed tutorial describing no less than 8 methods to turn on Android devices without the power button. You should take a look at that too. As for powering off the device, you can use an ADB command to power off your phone.

When the power button is broken, we cannot wake up the screen so that we can unlock the phone using the PIN or pattern. Most smartphones these days have a fingerprint sensor is located on the screen itself. You can easily unlock your device by placing your registered finger.

There are several ways to wake up an Android phone screen without using the power button. You can find a bunch of button remapping apps at the Google Play Store that can add the capability to invoke the Android power menu by using the volume keys. Apart from that, you can enable motion and gesture settings like lift to wake and double-tap to turn on the phone’s screen to wake up your phone even without using the volume button. Moreover, if you are an advanced user, you can also try the ADB commands mentioned in this guide to wake up or unlock your Android device.

In this tutorial, we’ll check out all possible ways to wake up an Android device from sleep but we’ll be starting with the use of the volume button to wake up Android phones. In case your phone’s power button is already broken, the first thing you’ll need to do is to wake up the screen from sleep and unlock the phone. The easiest way to turn on your smartphone’s screen without using the power button or an app is to-

By default, the volume keys on your Android phone or tablet cannot wake it up. However, thanks to the open-source nature of the OS we have a plethora of apps that can add a range of capabilities to the volume up and down keys of your device. Having tested dozens of apps from the Google Play Store,  have shortlisted 3 apps that let you wake up the phone with the volume button.

Volume Unlock is a nifty app that simply does what it says. The app is free to use with ads and requires device administrator permission to function properly. Volume Unlock might come in very handy in case the power button of your Android phone is broken.

Just install the app allow it the required permissions and toggle the Enable/Disable Volume Power option to wake up the screen of your Android phone or tablet without using the power button. You can press the volume up or down key to wake your device from sleep and access the lock screen and unlock it using your biometrics, PIN, or pattern.

Please don’t forget to enable the Start on Boot option to keep the app active even after you reboot your device. Moreover, you can also lock your phone’s screen via the notification panel but you’ll have to turn on the Tap the notification to Screen Off option. The app also offers a widget that can be added to the home screen. You can lock your phone by tapping the widget. 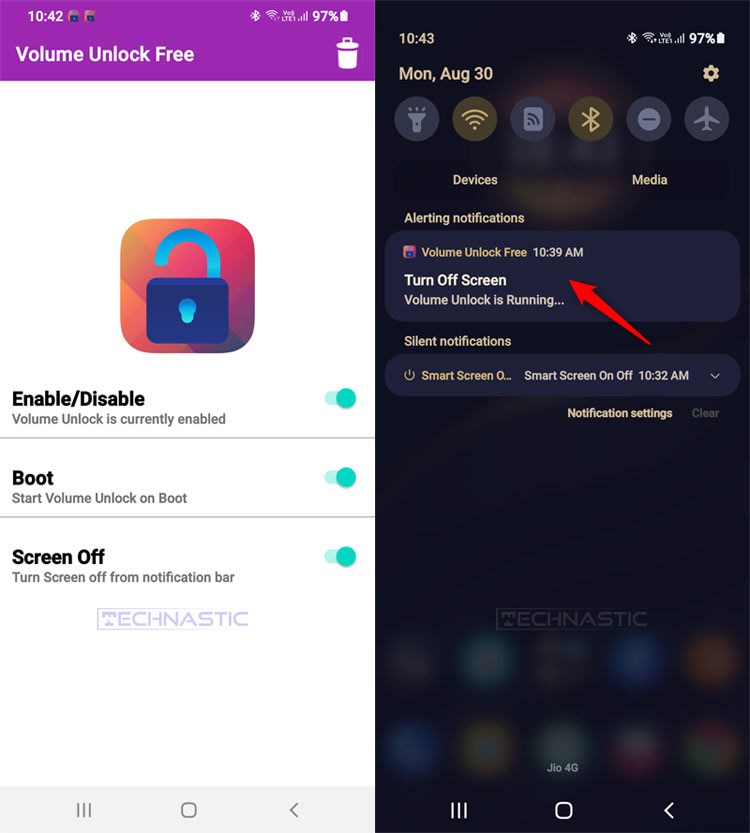 Wake up the Android screen with the volume button

Volume Unlock Tool is another great app that lets you wake up an Android device from sleep using the volume key. It’s the best among the 3 apps listed here because it’s minimal and gives an ad-free experience.

Like all other screen wake-up apps, Volume Unlock Tool also requires device administrator permission, especially if you want to enjoy the screen lock feature via the notification panel. Install the app and toggle on the three options it provides and you’ll be all set to wake up your phone’s screen by simply pressing the volume up/down key. If your Android phone’s power key is not functional, you can Volume Unlock Tool as an alternative.

The third app that we have picked for you has the same name and offers the same functionality as Volume Unlock. It adds the function of the power button to the volume buttons so that you can easily wake up your device screen if the former is broken.

Apart from turning off the screen from the notification center, Volume Unlock also allows you to make your screen sleep by flipping the device. Once you have enabled the first four options in the app, you’ll not need to worry about using the power key to lock or wake up your phone’s screen. Moreover, you can also schedule the automatic On and Off timing of the app. You can also add a home screen widget to lock the screen conveniently just by tapping it. Please note that the app might irritate you with ads that appear too frequently.

Wake up Screen with Motion & Gesture

All smartphones come equipped with sensors like Accelerometer, Gyroscope, Proximity, etc. that facilitate features like Lift to wake, double-tap to turn on the screen, double-tap to turn off the screen, and wake up the phone when you take it out of your pocket. You can enable these features from your Android phone’s settings to wake up and turn off the device by performing certain motions and gestures. On some Android devices, the double-tap to wake feature comes enabled out-of-the-box. Just give it a try when your phone’s screen is sleeping to find out if it works.

Here’s how you can turn on the screen wake-up feature on Android devices.

That’s it. You can now raise your phone or double-tap the screen to wake it up and access the lockscreen. No need to use the power or volume button, or a third-party app!

Anyway, if your Android phone or tablet doesn’t have the gesture and motion settings, there are apps like Shake to Wake, Gravity Screen, Smart Screen On Off, etc, in the Play Store that will do the job. I installed almost all free apps that can help wake up a phone’s screen using the double-tap gesture, volume keys, and proximity and gyroscope sensors to find out the ones that really work. All these apps demand device administrator permission to work.

I have listed my handpicked Android apps below.

Well, this might not sound like a practical solution because it’s simply ridiculous to carry a laptop just to make one’s Android phone’s screen wake or sleep. Nonetheless, since it’s a working method, I’m going to mention it with the hope that someone might find it helpful.

ADB Shell input keyevent command can be used with certain variables to control Android devices via hardware and on-screen key simulation using commands. Please note that you must have USB debugging enabled on your Android device to use the commands listed below. Also, you would need to download and set up the SDK Platform tools on your Windows or Mac computer.

By using the following ADB Shell input keyevent commands, you can wake up the device from sleep or turn off the screen programmatically. The keyevent command with “KEYCODE_POWER” extension works like the power button long-press action and brings up the Power menu.

Finally, it’s time to wrap up this tutorial before it becomes tiresome. I tried to include all working methods to wake up the Android phone’s screen without using the power button. If you have any suggestions that can make this tutorial better, please let me know.