How to Install Themes in Ubuntu 17.10

The latest version of Ubuntu which is 17.10 has ditched the Unity desktop environment for good. Instead, it has adopted everyone’s favorite, Gnome desktop. Unlike Unity, Gnome is pretty customizable and getting it to look like Unity wouldn’t have been a problem. But Canonical has already modified Gnome to make it look like Unity. And to be honest it looks better than Unity. But you don’t have to like something everyone else does because you’re using Linux. Like Android on smartphones, Linux is pretty customizable. There are a number of great themes that can totally change how your desktop looks and feels. If you’ve Ubuntu previously you obviously know this. But since Ubuntu 17.10 brings back the Gnome desktop, you may not be aware of how theming works. So here we’ll explain how you can install themes in Ubuntu 17.10.

Before you can learn how to theme the Gnome desktop on Ubuntu 17.10, you should probably know what exactly you want to theme. Unlike Unity, on Gnome you actually have the choice to theme different parts of the interface differently. 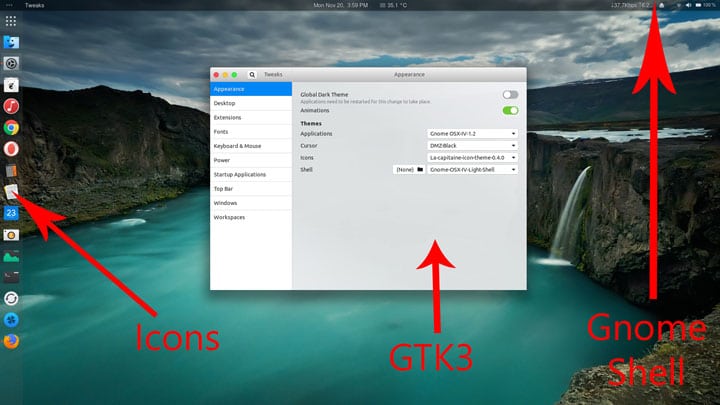 Icon themes will change simply the icons for the installed apps. On Unity, applying an icon pack changed the icons for everything, from the folder icons in the file explorer to the status icons in the top right. That did not always end up looking good. In Ubuntu 17.10, all you need to take care of is that the icon pack has support for a wide range of applications.

GTK is a cross-platform framework that can be used to design the user interface of an application. Many apps on Linux make use of this framework or toolkit. Therefore, installing and applying GTK themes will theme the interface for these applications. For instance, Google Chrome for Linux uses GTK. At present, Ubuntu uses GTK3 so you should download GTK3 themes.

The Gnome shell is like the System UI on an Android device. It includes everything else such as the top bar, activity overview, desktop notifications etc. So then obviously, Gnome shell themes will theme these elements of the Gnome desktop.

There are a few themes that include themes for all the three elements thus giving your Gnome desktop a more uniform look. There are also many standalone Icon themes, GTK themes, and Gnome shell themes that you can combine to create your own unique look.

Themes can be installed in Ubuntu in three ways. If you like theming a lot you will at some point have to use each of the three methods. Some themes can only be installed in a certain way since there is no official standard on Linux.

Using PPA (Personal Package Archives) is one of the most common ways to install not only themes but anything on Ubuntu. The method does have its advantages. Adding a PPA to your system ensures that any updates to the package you’re installing will be automatically installed with other software updates. If a theme can be installed by adding a PPA, you will more often than not find the necessary information along with the theme. For example, to add the Zukitwo (GTK + Gnome) theme you can use the following commands. 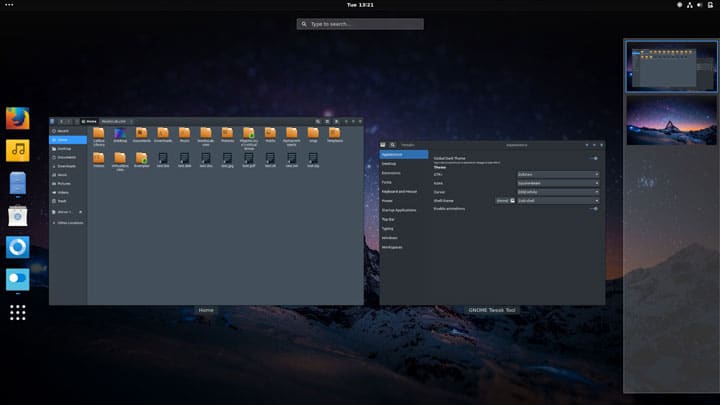 Just enter the commands one by one in a Terminal window and follow on-screen instructions to install the theme.

Another very popular method to install software on Ubuntu, not just themes but apps too, is through .deb packages. These are executable package files like an APK on Android or an EXE on Windows. Let’s take the Moka Icon theme here as an example. You can download the .deb package from the link below. Once downloaded, just double-click on it and the theme will be installed via the Ubuntu Software Center.

While PPA and Debian packages are the most common method to install apps on Ubuntu, uncompressing zip files and manually placing the extracted files is probably the most common method to install themes and icons. If you’re looking all over the Internet for Ubuntu/Gnome themes you will, most of the time, simply find a zip, tar, or another kind of archive file. It can also be a much easier way of installing themes than typing commands, depending on your perspective. All you have to do is unpack the archive. Go to your Home directory then and press Ctrl + H to show hidden folders and files. If you find folders named .icons and .themes, good for you. If not, you will have to manually create the folders.

Since this is an icon theme, copy or cut the extracted folder and place it in the .icons folder in your Home directory. The installed themes can be easily applied via the Gnome Tweak Tool.

Read Next: How to Switch Display Manager on Ubuntu Linux