How to Record Screen as GIF in Ubuntu

How popular would online gaming streams be if they were just pictures instead of a running movie? Probably not as popular as they are. We use a lot of screenshots to demonstrate something to you. Screenshots have become one of the most basic features that now every operating system is providing built-in. Windows computers have long had the PrtSc button that captures the screen. However, it only saves it on the clipboard, only to be overwritten by something else later. On Ubuntu, the same button takes a screenshot. But a screenshot doesn’t always cut it. Say, you have a cool new window animation that you want to show off but you can’t, not with screenshots. Videos may be too large and not effective. Sometimes you just need to record screen as GIF.

What would you prefer? An animation or video or a series of screenshots stacked on top of each other? While static images provide the benefit of being smaller in size, sometimes you need the big guns, that is a screen record. Windows 10 has a built-in screen recording tool that works in certain places. Ubuntu does not have anything of the sort. If you do want to record the screen you can also use VLC media player which you most probably already have. But mostly, if you want a decent screen recording experience, either on Windows or Ubuntu, you have to rely on third-party tools.

In this Article hide
1. Peek
2. How to install Peek
3. How to record screen as GIF with Peek

The third-party tool we recommend using in Ubuntu is called Peek. It is one of the best screen recording utilities available on the platform. Compared to many other screen recording tools on all platforms, Peek has a focused, clean design. You don’t see anything but a Window border indicating the area of your screen that will be captured. This border also has a toolbar at the top featuring a drop-down menu to select the format, a record button, and a close button. This minimal design makes the workflow sumptuously simple.

How to install Peek

Installation is pretty simple if you have installed software on your Ubuntu machine before. Peek can be installed via their official PPA or via the Snap app, a Flatpak, or AppImage. The developer, however, will be discontinuing the Snap app starting with the next update. Flatpak and AppImage will still be available as well as the PPA. Peek’s official PPA provides up-to-date builds for supported Ubuntu versions. We recommend using the PPA since it means you will receive updates to the app automatically. This helps keeps your software updated to the latest version. To install it, run the following commands in a terminal one by one and follow on-screen instructions. 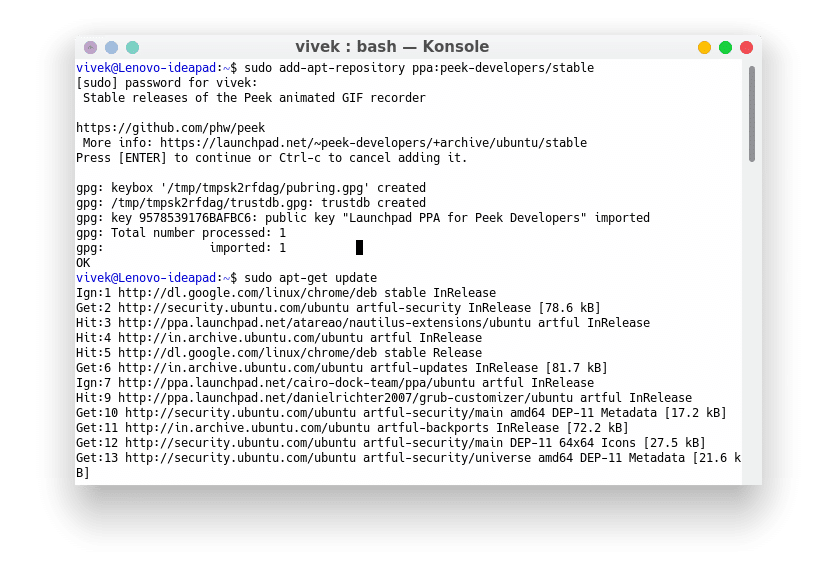 How to record screen as GIF with Peek 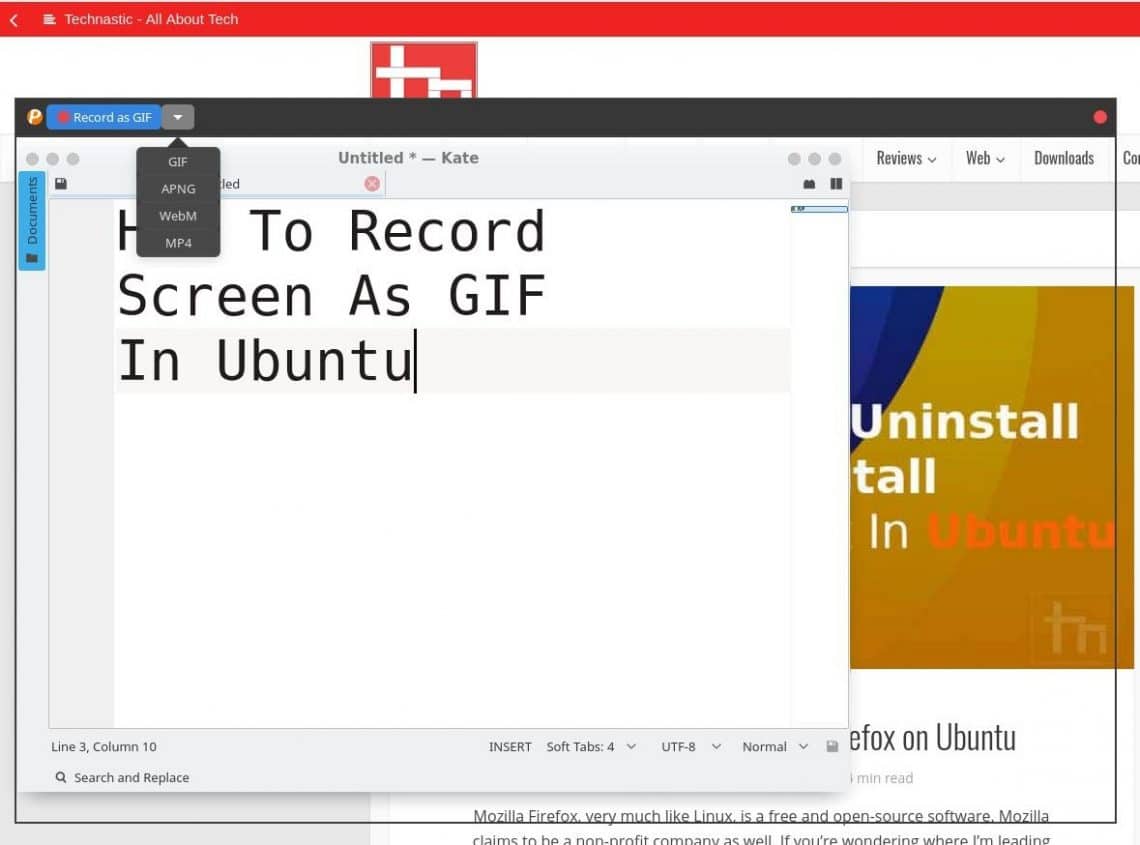 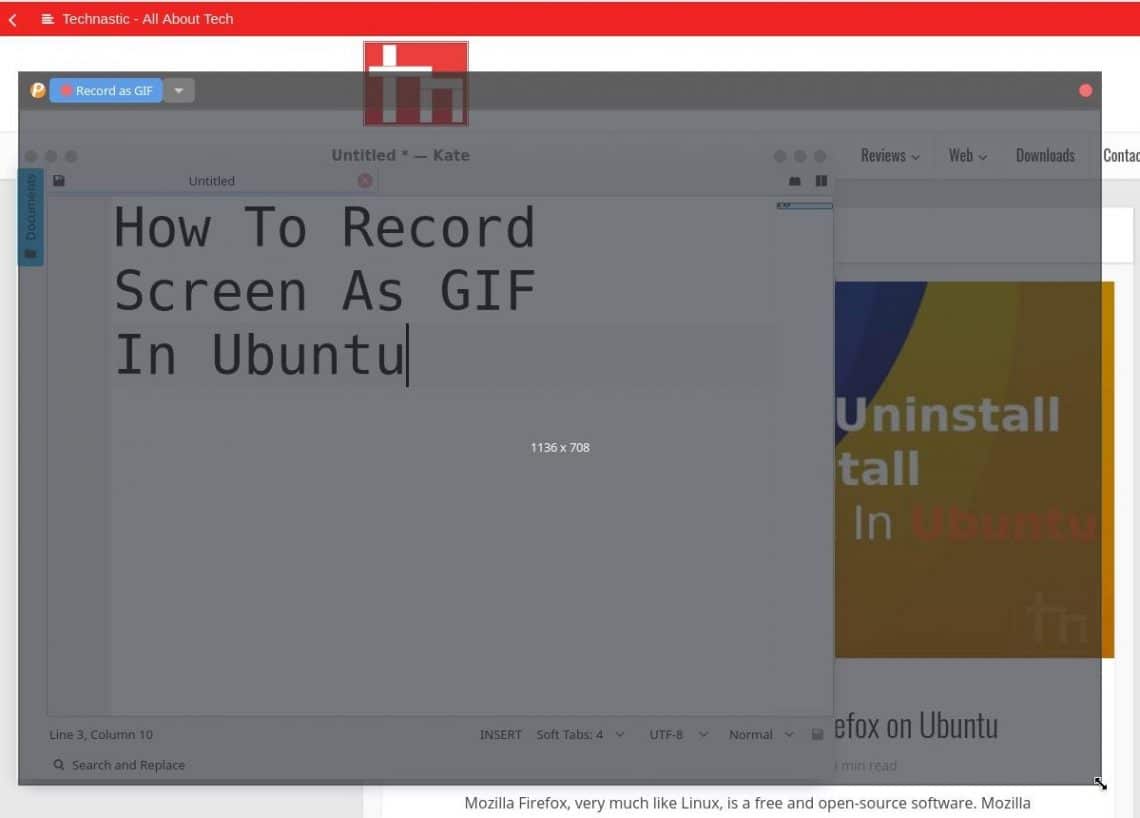 Before you start recording, you might want to adjust the size of the Peek window. It will record everything inside the window, so you don’t have to worry about cropping the GIF or video later. This also means you can’t record parts of your screen where a window isn’t allowed to expand, such as the top or bottom panels found in many desktop environments. You can access the Preferences where you can change a few things, but sadly there isn’t an option to somehow enable recording the full screen. For now, full-screen recording remains a feature we can perhaps look forward to in later updates.

Realted tutorial: How to Use GNOME Screen Recorder in Ubuntu