Whatever is an Evernote Alternative for Linux and Ubuntu

Evernote, like many other popular software companies, has mostly ignored Linux. But the open-source community always has something up their sleeve. Officially, the Evernote app is available only for Windows, macOS, iOS, and Android. There’s also a web version that can be accessed using a browser, regardless of the operating system. However, a native app has a few advantages over a web app such as convenience. Whatever is an unofficial Evernote client for Linux and Ubuntu.

Taking notes, organizing your ideas and managing day-to-day tasks has never been easier. Today you have many cross-platform apps with official clients even for Linux. But Evernote is where it all started. Now, Evernote was not really the first note-taking app ever made. But neither was the iPhone really the first smartphone nor really Superman the first superhero. But the iPhone kickstarted something, so did Superman and so did Evernote. Quickly, big names like Google and Microsoft jumped in with their own take on note-taking apps.

As already mentioned, Whatever is a lightweight Evernote app for Linux. This electron app provides almost every single Evernote feature there is, natively, for your Linux desktop. The app, like many other electron apps, essentially loads up the web version of Evernote. But it enhances the ability of features by providing extensive desktop integration via the electron framework. 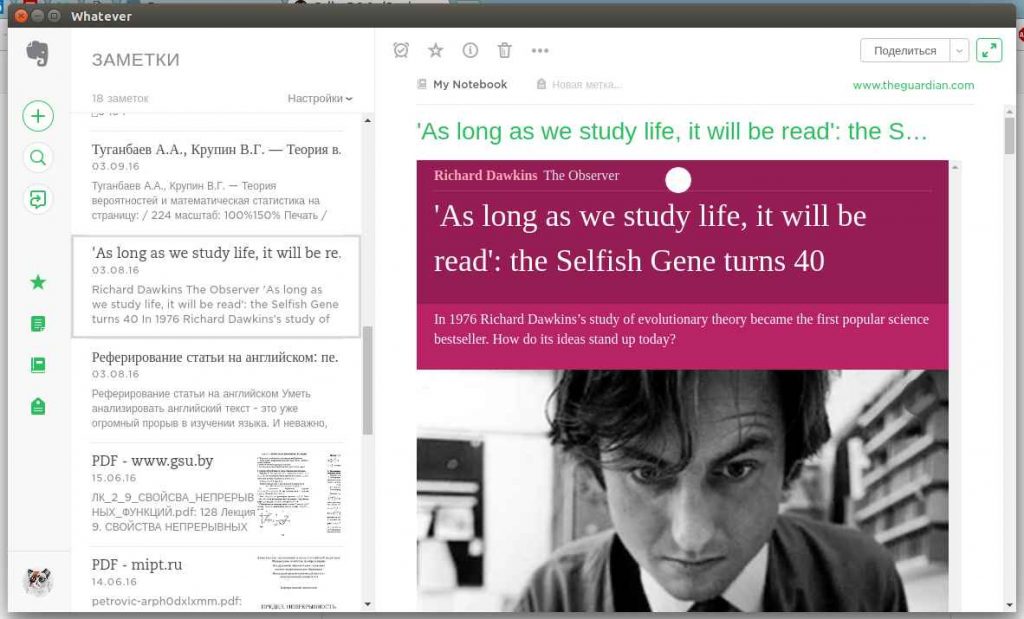 Whatever does almost everything you’d expect out of an Evernote app. Here are some of the notable features.

Whatever is available free of cost as a .deb package as well as a .tar.gz package. You can use the .deb package to install the Evernote app on Ubuntu or any other Debian based distro. The .deb file of the unofficial Evernote app can be installed on Ubuntu via one of the following two ways.

Once the installation is complete, you will find the app in your apps menu.

Even if you choose to use the terminal, you have a couple of choices. You can either use dkg or Gdebi. Neither of them provides any real advantages over the other in this scenario. But dpkg is available right out of the box on Ubuntu. Gdebi is something you will most probably have to install.

If the installation is successful without any errors, you should see Whatever in your apps menu regardless of the method you chose.

That’s all for now. If you also want to know how you can install Dolphin File Manager and use it on Ubuntu, read my step-by-step guide in the topic.