Windows 10 finally caught up on the virtual desktop train a while back. While the implementation was mostly well done, it wasn’t to everyone’s satisfaction. If you’re a power user, you probably wish for features like the ability to set different wallpapers for each virtual desktop. But then, that’s what Windows 10 is about. A progressive OS that gets regular updates and new features. Windows 10 now natively supports such a feature.

Why would anyone want to set a different wallpaper for each virtual desktop? Well, for one, it makes each desktop easily identifiable. This is also possible by giving each desktop a different name. Although, wallpaper is much easier to see than a piece of text. The ability to rename each virtual desktop was also added later in an update. Before you jump to the steps given below, don’t forget to check out these 25 Windows 10 keyboard shortcuts to get things done more quickly and professionally.

Third-party apps have existed for a long time that allow you to change virtual desktop backgrounds individually. However, nothing quite beats the convenience of a built-in option. The feature that lets you set different wallpapers for virtual desktops in Windows 10 is natively available only on Windows 10 build 21337 or later.

Another way to change the desktop background of a specific virtual desktop is to do it from within. And then you can just change the background as you normally do. 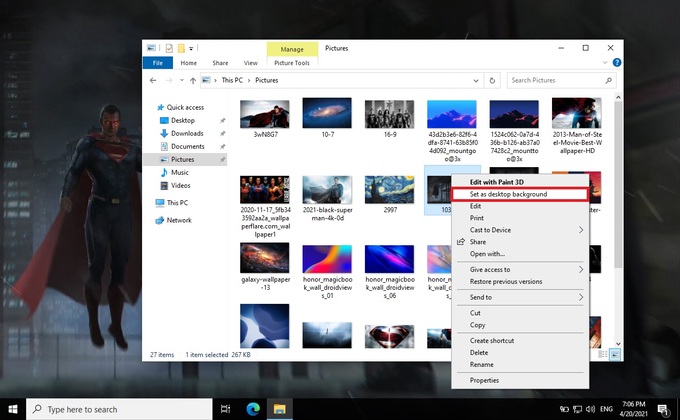 The image will be set as the wallpaper for only the current virtual desktop.

You can also achieve the same results using the Settings app on Windows 10.

When you switch to the virtual desktop you should see the wallpaper you applied. As of this writing, Windows 10 build 21337 is available only to Windows Insiders on the Dev channel. We can expect this feature to roll out to everyone with the Windows 10 update that typically arrives in May.

Read Next: How to Turn Off Background Apps in W9indows 10