If you’ve ever been curious about the gaming scene on Linux you’ve probably heard of Valve, and its gaming platform Steam. Gaming used to be something you could do better on a smartphone than a full-blown high-end Linux PC. That’s not because Linux can’t handle graphics-intensive games but because there just wasn’t any support. Now with Valve’s commitment to Linux gaming things have been changing slowly. The big names like EA still don’t consider Linux seriously but at least many Indie games on Steam get a Linux release. Valve is now trying a new feature for Steam Play which will let you play Windows games on Linux.

In this Article hide
1. Proton
2. Whitelisted titles
3. Note
4. How to play Windows games on Linux with Steam
4.1. Get Steam Beta
4.2. Enable Steam Play

You’ve probably heard that news if you like to stay in the loop. Valve is currently testing the Steam Play feature on the Steam beta for Linux. The feature is officially named Proton and is a fork of WINE, except it shouldn’t be as hard to use. Valve has even made the source code available on Github, that is to say, Proton is open source. While in theory, you should be able to play all the Windows-only games available on Steam, the reality is a little different. For now, only a small list of games are supported but you can expect the numbers to grow fast when the feature gets out of beta. Officially supported at launch, including DOOM, Final Fantasy VI, Tekken 7, Star Wars: Battlefront 2, and several more.

As mentioned, the feature is still currently in beta so expect bugs even on supported games. And those that are unsupported, some games will crash, some won’t start, some will do both but may run into problems later. As of now, Valve has whitelisted only 27 games out of 27000 that should work with Steam Play. Since the feature is still in beta, you won’t be seeing Windows-only games on the Steam Store using your Linux Steam client. You’ll have to manually search for these games. You can find an updated list of games you can install and run on Linux on this community maintained list.

How to play Windows games on Linux with Steam

Well, needless to say first of all you’ll need the Steam client installed on your Linux PC. You can find a version for your Linux distro available over at the official Steam website. 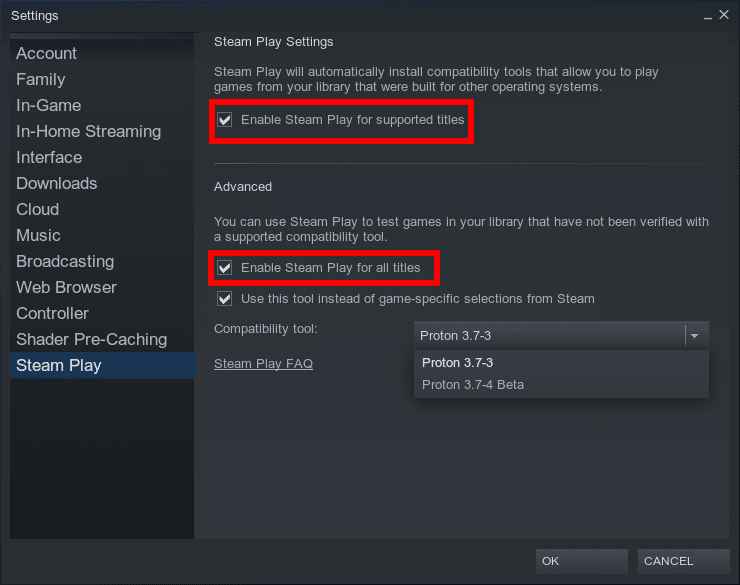 When Steam restarts with the beta update installed, go to Settings again, click on Steam Play in the left column and enable the following options.

When you find a Windows only game on Steam now using the client, you should be able to see the Install button.