How to Install Linux Apps on Chromebook

If you’ve been out of the loop, Google’s bringing Linux apps to Chrome OS. If you’re a fan of Chrome OS or Linux, this is a big deal. Chrome OS is gaining popularity and at least amongst the enthusiasts, it’s becoming a thing of its own. Chrome OS still lacks apps that can make it a true desktop OS competitor though. The absence of serious productivity apps is a roadblock. With Linux apps, Chrome OS can have that Photoshop alternative that doesn’t suck, for instance. It can have Adobe Premier alternatives that Linux users have been using for years. Maybe Google can even convince big names like Adobe to develop an app for Linux. In which case, it’s a win-win for everybody. You can even install Linux apps on a Chromebook powered by Chrome OS.

Before you begin though it’s worth noting that Linux app support is still in beta. Graphics acceleration or sound does not work with Linux apps yet and obviously, things can be buggy. Moreover, Linux apps are not supported on all Chromebooks right now. You can find a list of compatible devices on Reddit.

To use Linux apps, you’ll also have to switch to a Chrome OS development channel. Like the Chrome browser, at any given time, Google maintains four different versions of Chrome OS: Stable, Beta, Dev, and Canary. Everything except the Stable version is a development version. It has the least number of bugs if any. Canary, on the other hand, is the most experimental and least stable. The Beta and Dev versions are less buggy and can be used as daily drivers. You can follow this guide to switch to a development channel. 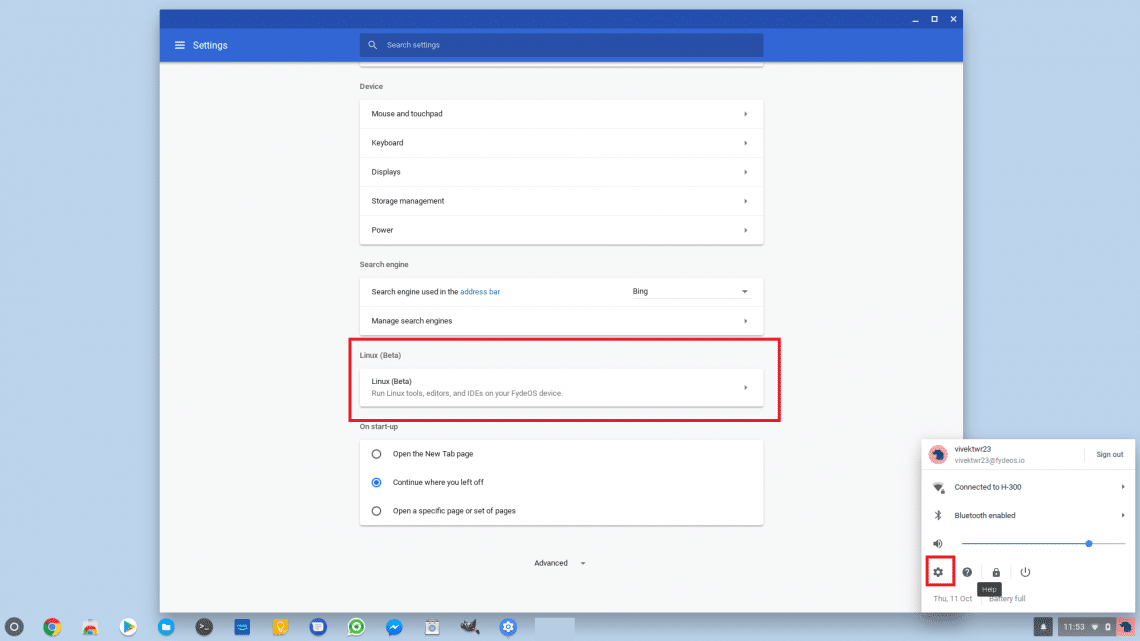 Even after you’ve switched to a developer channel, Linux app support isn’t enabled by default. Enabling it only takes a few clicks though.  Access the Chrome OS Settings by clicking on the gear icon in quick settings. Scroll down until you see the option for Linux apps and turn it on. If you don’t see the menu option, your device isn’t yet supported. When you’ve turned it on, you’ll be asked to install the Linux container.

Without going into details, it’s a bunch of things that will allow Linux apps to be installed on your device and also provide you with the means to do that. Installation can take some time depending on your internet connection. Once it is done though you’ll see a Terminal window where you can start typing commands. The Terminal app icon is also added to your app launcher. We have some more Chrome OS tips and tricks to get a better experience on your Chromebook.

Most things on Linux happen through the command line, via the Terminal. So a Terminal is all you need to get your Linux apps up and running on Chrome OS. Many of the popular Linux apps are included in the software repositories of most Linux distributions. The Linux container on Chrome OS runs Debian 9. Therefore, anything on the Debian repositories can be easily installed as long as you know the exact package name. For instance, say you want to install GIMP, the Adobe Photoshop alternative that’s completely free. You can simply run the following command in the Terminal to do that.

If you want to uninstall it, just run this command.

To update your system, and all the installed Linux apps, you can use this command.

Android has the Google Play Store, but you can still install it from other sources via APK files. APK files are nothing but app packages for Android, Similarly, there are Debian app packages known as DEB and you can find plenty of those all over the internet. Once you have one, you can just open it normally with a double-click. If you’re somehow on an older version of Chrome OS, the File Explorer will not have support for opening .deb files. In that case, you can again use the Terminal.

Like Debian packages, Linux distros also supports several other packaging formats but each format is restricted to a specific distro. Flatpak is one such packaging format developed to work across all Linux distributions. There are some apps that are available only as a Flatpak and can’t be found in the official repos or as a Debian package. While you can use Flatpaks on Chrome OS, its buggy and probably shouldn’t be used unless you have no other option. First, you’ll have to enable Flatpak support.

Reboot your machine and then install any Flatpak from the Flathub website. Every app on Flathub has command-line instructions at the bottom of the page. Just add sudo before every command.

You can also install a Linux Software Center on Chrome OS, which is like the Chrome Web Store but for Linux apps.

1 thought on “How to Install Linux Apps on Chromebook”