If there was one thing everyone agreed on about Windows Vista was that it sucked, but the Aero Glass theme was awesome. Microsoft’s implementation of glass and transparency in the right places made Windows Vista an eye-candy, even though it failed in every other department. This is why Windows 7 then kept the design while leaving out the rest of the unnecessary stuff. You could call Windows 7 a mixture of the best of Vista and XP. Microsoft decided to remove it for a more flat, modern look on Windows 8 which once again tanked pretty much like Vista. Many users wanted the Aero Glass theme back, and when Windows 10 was launched, those people still wanted the Aero Glass theme. You can complement the Aero Glass transparency in Windows 10 with a fully transparent taskbar.

There’s still a while before users can get a taste of Microsoft’s Fluent design which incorporates transparency and blur effects among others. If you want the aero glass transparency with the blur effects right now, the only choice is using third-party hacks or tools. Windows 10 originally had the aero theme with blur and transparency which could be enabled via a simple registry tweak. That is sadly not the case anymore as the said Registry keys were removed in subsequent updates. Later versions did get the theme enabled, in parts. For instance, in the start menu, taskbar or the action center, thanks to user feedback. Although, Title bars and Window borders are still using the same flat design and colors as Windows 8.

A developer who goes by the name BigMuscle originally revived the Aero glass effect for Windows 8. He then updated it to work with Windows 10. The developer has been updating it to support newer versions of Windows 10 as well. His tool, simply called Aero Glass for Win8+, uses DirectX to make the Window borders and Title bar transparent. The caveat is that the latest version of this tool is only for 64-bit systems. There is no solution for 32-bit Windows 10 machines if you’re running Windows 10 Fall Creators update. If you’re still running an older version of Windows 10, you can enjoy some Aero Glass as well. It is available in 32-bit versions for previous Windows 10 versions as well. 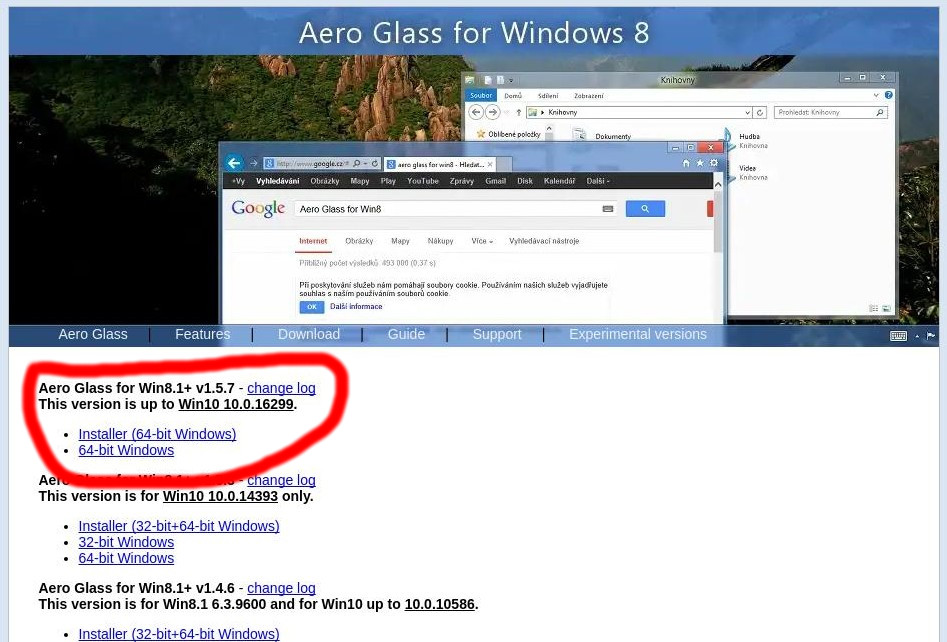 Visit the official Aero Glass download page and download a version of the installer according to your Windows version. For instance, if you are running Windows 10 Fall Creator’s update, download the 64-bit installer for Windows 10.0.16299.

Once you have downloaded the installer, all you have to do is run it and follow the on-screen instructions. Within a few clicks, your job will be done. You should now be seeing Windows 7 like transparent glass title bars and window borders. The tool allows you to change a number of things about how the Aero Glass theme is implemented. These can be done via registry tweaks but winaero.com has actually created another tool to tweak the settings of the Aero Glass tool. Having downloaded it, extract the archive and run the tool to change anything you want.

Also see: Recover from Black Screen Due to 3rd-party Themes on Windows 10