You might be using a computer for a long time, but there may still be a lot of basic aspects of your system that you don’t know of or don’t understand at all. For instance, consider file systems. Now, we all come across file systems every time we work on computers, but many of us don’t know what they are and what they are actually good for. Consider USB drives, for example. They provide quite a simple and utterly convenient method of transferring data from one machine to another. But if you have carefully observed a USB drive properties, you must have noticed that their file systems are either FAT32 or NTFS. Do you know what these really mean?

The file systems in Windows: NTFS, FAT32 and exFAT

A file system simply proffers a way of organizing a drive. More specifically, it dictates what kinds of information can be attached to files (eg. permissions, filenames etc.) and how data is stored on the drive. Windows operating system makes use of three primary file systems namely NTFS, FAT32 and exFAT, all of which are used to store data in a storage device. For example, the operating system is installed on a partition on the hard drive is NTFS, which stands for New Technology File System. It’s the most modern and advanced file system Microsoft has produced so far.

All the three file systems have some advantages and pitfalls, let’s look at them individually.

This is the file system that Windows uses to store and retrieve files on a hard drive. It’s the system that Windows uses by default for its non-removable drives. Microsoft first introduced this file system in the consumer variant of Windows XP, albeit it actually debuted with Windows NT. Note that when you install Windows operating system on your system, your system drive is formatted with the NTFS system. 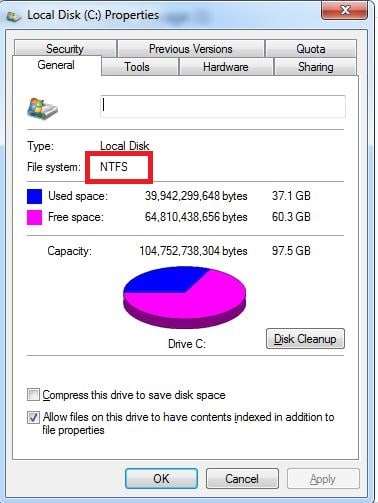 Since NTFS is the most modern file system of Windows, it’s packed with features that are not available in the FAT32 and exFAT systems. It allows file permissions for security, which can assist in quickly recovering from system crashes, encryption, hard links, disk quota limits and numerous other things. It’s main disadvantage is that although it works with all recent versions of Windows all the way back up to Windows XP, but has limited compatibility with Mac OS X, Linux and a few other operating systems. So, it’s best if the NTFS system is used with Windows drives and other drives that are going to be used in the Windows ecosystem only.

FAT32 was launched back in the time of Windows 95, when it replaced its predecessor FAT16 that was used in Windows 3 and MS-DOS. It’s the oldest of the three aforementioned file systems.

The biggest plus of FAT32 is that since it’s the oldest, it’s often the de-facto standard of drives. If you have a FAT32 drive, you can be sure that it could certainly be run not only on computers, but also on other electronic devices like gaming consoles. So, it’s biggest advantage is that it works on all versions of Windows, Linux, MAC OS, gaming consoles, and almost any machine with USB support. A few of its limitations include a cap of 4 GB on individual files, cap of 8 TB on individual drive, no fault tolerance and no compression etc.

It was launched back in 2006, as a replacement of FAT32. It happens to be as lightweight a file system as FAT32, but lacks the modern features of NTFS. 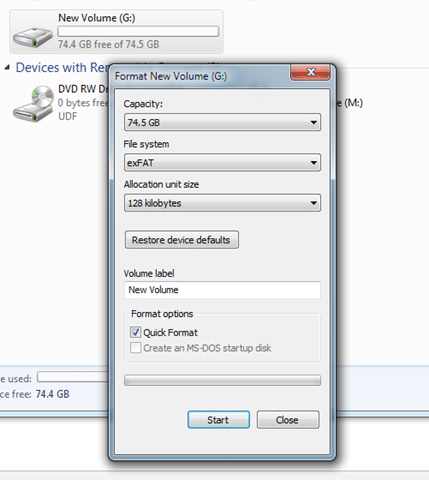 More devices support exFAT than NTFS, especially the ones that are old. It works with all versions of Windows and MAC OS X, but requires some additional programs to be run on Linux. Also, its partition-size limits and file-size limits are not realistic.

In a nutshell, if you are using modern hardware of Windows, you should format your drives with the NTFS system for its modern and powerful features. File systems are actually an unnecessary complication, but it seems that they’re not going to go anywhere, at least in the near future.