How to Take Screenshot in Chrome Browser

In this tutorial, we’ll discuss a few browser extensions for Chrome that allow you to take screenshots of web pages. Here are some of the best Chrome screenshots extensions like Full Page Screen Capture, FireShot, and Webpage Screenshot that let you take a screenshot in Google Chrome. Whether you want to capture a full webpage or a specific part of a webpage, these extensions will help you do all those stuff easily.

Being able to take screenshots has become such a basic feature on any device with a screen. It’s not only useful when you want to show off your desktop or smartphone setup but also helps a lot in finding help with your problems online. You could send screenshots to a friend who knows technical stuff and asks him about something. On your computer, it could be used to save an invoice that’s not downloadable, save pictures that you aren’t allowed to, etc.

If you want to learn how you can save a webpage as PDF in Chrome, Firefox, Edge, Opera, and Safari on different Operating systems, read my detailed guide on the topic.

But when you want to save a web page or share a web page, you always have options to do that. You can share a URL, or right-click and select Save as… and then share the actual web page. Still, you may sometimes want a screenshot of the web page. Because it is a lot easier to take a screenshot and annotate it when you want to show someone that lame Facebook status update. It’s also easier for the recipient since they don’t need to click a link and visit a web page to see what you’re trying to show.

Most operating systems these days come with handy screenshot tools and shortcuts built-in, even Windows. So why can’t you use those to take a screenshot of a webpage inside Chrome? You obviously can but that will then include your browser’s UI in the screenshot as well. You could have several other tabs open that you probably don’t want the other person to see. Or you may have things on your desktop that you don’t want them to see. In that case, you’ll end up having to crop the screenshot after you take it. That is one extra, unnecessary step. And it can be avoided with screenshot taking Chrome extensions.

We have covered detailed tutorials on taking screenshots in operating systems like Windows, macOS, and Linux in the past. You should check them out too: 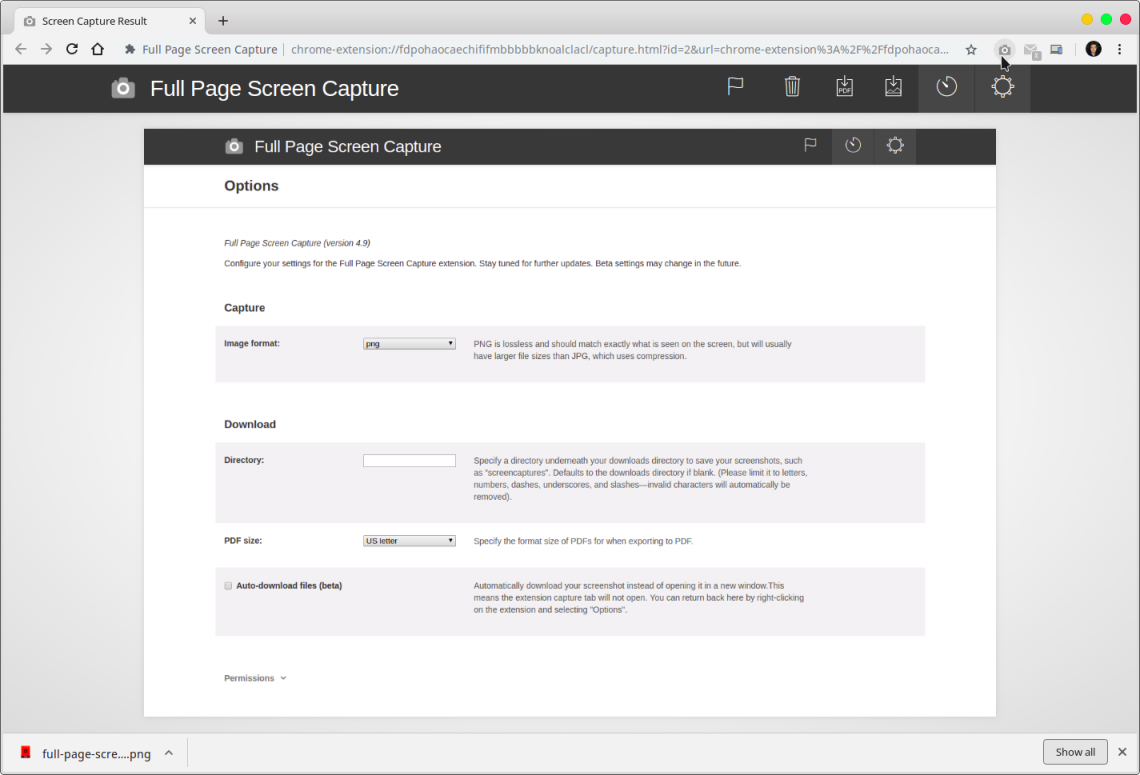 As the name implies, Full Page Screen Capture can capture the entire web-page at once. It’s probably the simplest of the bunch I’ve used and the icon matches Chrome’s overall look which is a bonus I think. That means extension doesn’t look out of place, unlike some others. It feels like a part of Chrome and it takes a screenshot the moment you click on it instead of giving you options. The options come later. You can either save it as a PDF document or as a PNG image.

If you want to save images like JPEGs, you’ll have to change that in the settings. There are a few other things you can change here as well. One of the best things about it is that it keeps a history of all the screenshots you’ve taken. That can be helpful.

Fireshot Chrome screenshot extension does what you’d expect it to, that is, take screenshots of a web page. Not only does it capture the entire web page in a single screenshot but it also lets you capture only a selected region or the visible part of a web page. These are features that were missing in the previous extension. Once the screenshot is taken, you can save it not just as an image in PNG, JPEG or GIF formats but also as a PDF document.

It also gives you the option to directly print it, send it to OneNote, clipboard, email, or upload it to Twitter, Google Picasa, Facebook, ImageShack, Flickr, and EasyCaptures. It’s perhaps the most feature-packed screenshot extension on Chrome considering the feature set. 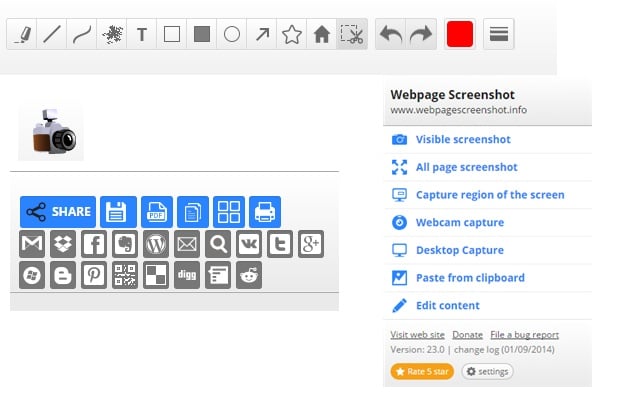 Webpage Screenshot – Entire page screenshot! claims to be the fastest extension at the job on Chrome but we didn’t do any scientific tests to test those claims. But what you get here will impress you. It can capture the visible part of a webpage or the whole page etc. You can even upload it directly to services like Dropbox, Facebook, Evernote, Twitter and so on.

The best feature here is that you can edit almost anything on a webpage before taking the screenshot. For instance, change someone’s Facebook status update to something stupid. You can then send them it to them and make them doubt their existence. It also lets you annotate screenshots.

Did you find any of these extensions helpful? Or have you been using a different extension that you think does a better job? Let us know in the comments below.

Read Next: How to Disable Incognito Mode on Google Chrome