GNOME is the default desktop interface you’ll find on most Linux distros. But GNOME isn’t the most buttery smooth desktop environment on Linux and it is certainly not very resource-friendly. Animations on GNOME are known to be generally choppy and not as smooth as something like KDE Plasma despite being just as heavy on resources if not more. If you’ve been using GNOME though you’ll most probably not want to switch to another desktop environment. So here we discuss some ways that can help speed up GNOME desktop. These methods work across all Linux distros whether you’re on Ubuntu, Fedora, Debian, Arch Linux or anything else. 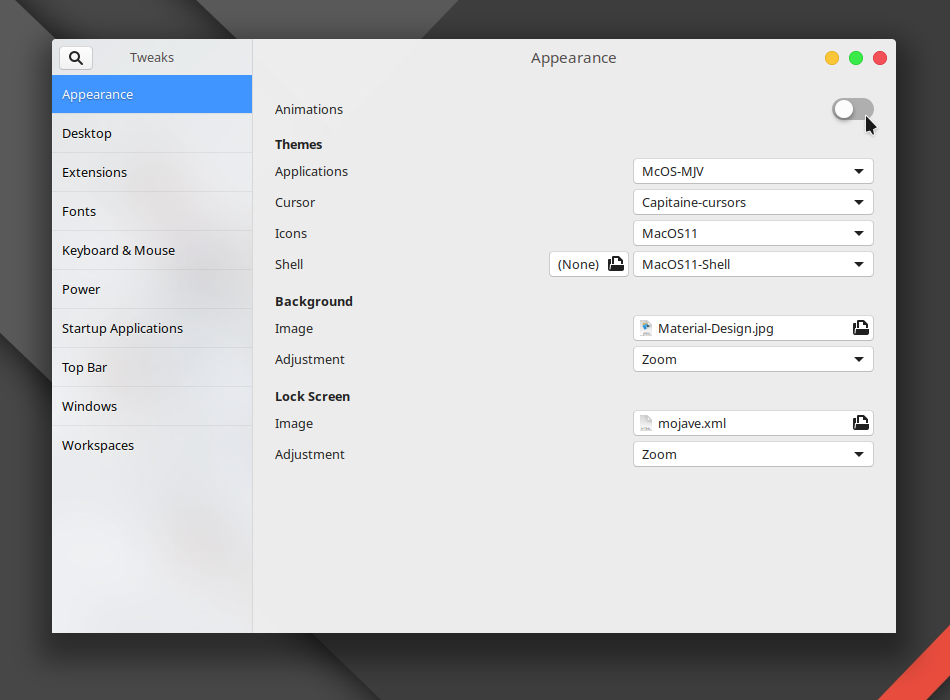 As we mentioned, animations on GNOME aren’t the smoothest. A quick google search will tell you how widespread the issue is and it has been so for quite some time since GNOME 3.22. Your PC may have the best hardware but GNOME animations might still come off as jittery. It’s not the best experience really. That said, some users also report that their GNOME experience is far smoother than the rest. So if you’re among those you might want to keep the animations on. If you’re not, you can disable the animations from the GNOME Tweak Tool and speed up your desktop.

To install Gnome Tweak Tool, run the following command in a terminal window:

You will have to enable the universe repository in the Software and Update app. 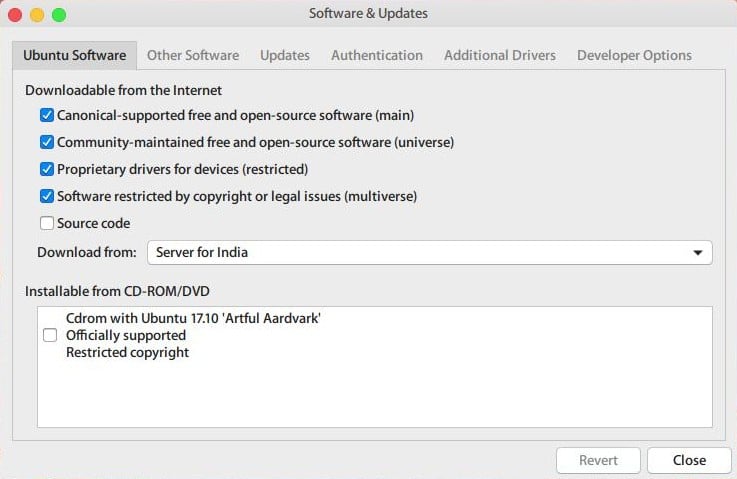 GNOME isn’t very customizable out of the box, unlike some other desktop environments. However, it does give users the ability to customize quite a lot of it via extensions. You can make the top-bar transparent, add a bottom bar, turn the dash into a dock or just get rid of all of that and combine the top panel and the dash to create a Windows-like taskbar at the bottom. All those extensions are the best thing about GNOME but they’re also one of the reasons that slow it down gradually. Each extension is an extra bit of code and UI that the desktop has to load up. Some extensions can put more strain on performance than others but even if they do, an extension alone doesn’t have much of an impact. 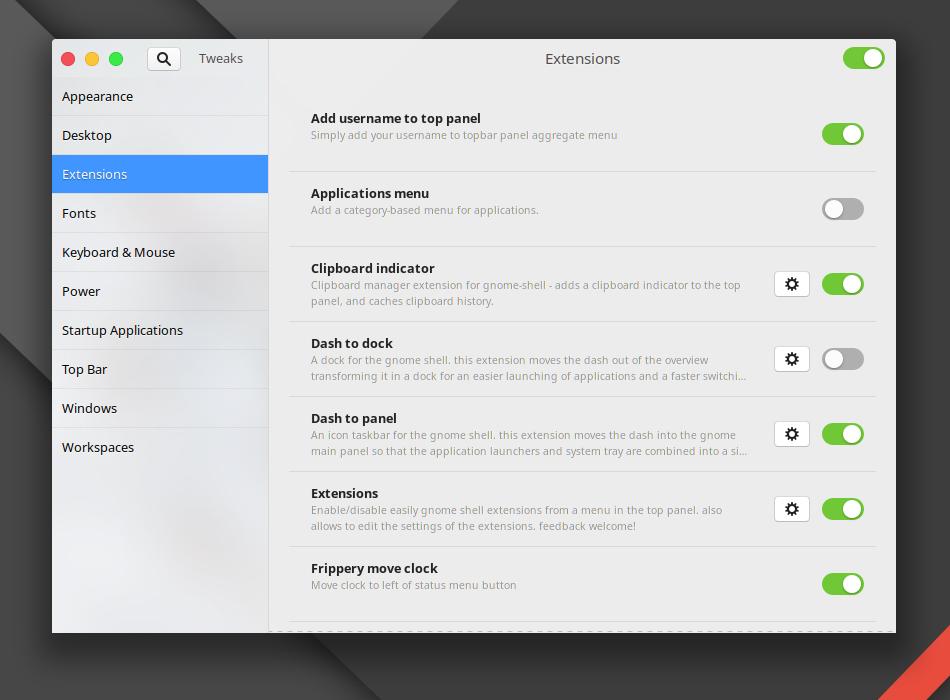 You’ll probably never notice any hit in performance instantly but over time things to get slowed down as you install more and more extensions. So if you’ve got a bunch of extensions running and you feel your GNOME desktop isn’t performing well, you can try turning off a few extensions or uninstalling them to speed up your desktop. This too can be done via the GNOME Tweak Tool from the Extensions section.

So far we haven’t been disabling essential GNOME features but if you have an older PC and you still want to use GNOME, you may as well have to disable some. Features such as file indexing aren’t really essential to the functioning of the GNOME desktop. However, it is a basic feature that you’ll find on many operating systems and desktop environments. File indexing is a service that runs in the background that reads these file names and creates an index. This service has to run often in order to detect new files that you create. So even when you’re just looking at your PC’s screen doing nothing, your PC is working behind the scenes. 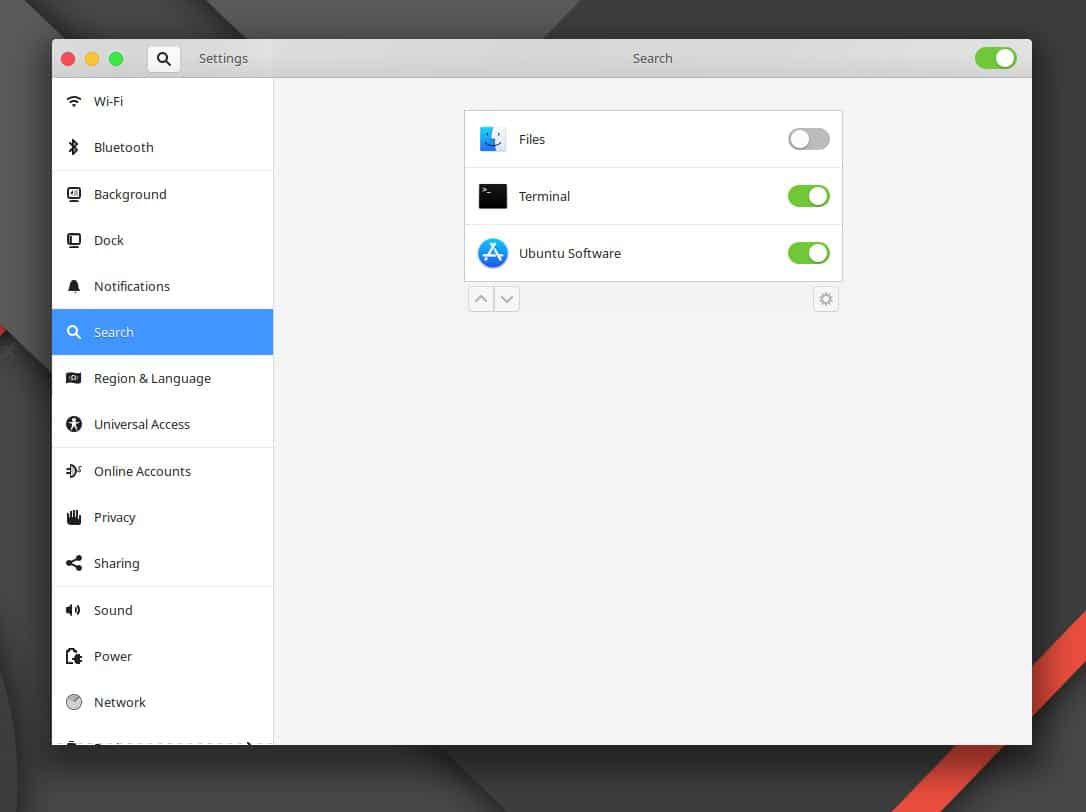 Turning off file indexing can not only save CPU and RAM but also save some battery. When you’re using a lower-end or an older machine, freeing up these resources can make all the difference and really help speed up your GNOME desktop. To disable file indexing, go to Settings > Search and toggle off Files.

Apart from apps and files, the GNOME activities search also performs searches from the Software Center, Terminal commands, Wikipedia, weather, bookmarks, etc. Not everyone uses a universal search and chances are you’re most probably using Google search to search the Internet. That means there are more resources that you can free up and speed up the GNOME desktop if you disable them. If disabling file indexing isn’t enough, you can go ahead and disable search sources entirely by toggling off the main toggle at the top. You will still be able to search for apps installed on your PC.

GNOME packs in quite a few pre-installed apps such as Firefox for browsing the web, Libre Office for your document needs, a media player, etc. These are great apps but they’re also quite heavy, just like GNOME. You can switch Firefox for a lightweight alternative such as GNOME Web, QupZilla or Eolie. You can check out our list of open source web browsers for Linux. Likewise, if you don’t really need to make PowerPoint presentations and do some heavy word processing, apps like Leafpad, Gnumeric, and AbiWord are all that you’ll need.