How to Get Started with KDE Plasma 5.11

KDE Plasma is easily one of the better desktop environments for Linux based systems. Of course, you most probably know that if you’re here. It is the default desktop environment that ships with Kubuntu, which is one of the official Ubuntu flavors. If you already have Ubuntu though, with GNOME, Unity, MATE or anything else you need not install the entire OS all over again. Simply install the KDE Plasma desktop on your machine and you can enjoy the full Kubuntu experience. But if you’ve been using Ubuntu with Unity or GNOME and don’t have much experience using anything else, the Kubuntu experience this might seem like an uphill battle. We showed you how to install KDE Plasma 5.11 on your system. So it only makes sense that we also show you how to work with it.

If you remember, I’ve stated again and again that getting started with KDE Plasma is really easy. It looks familiar and traditional and things do happen the way you’d want them to, at first. As you begin to use it though you’ll find it’s not so traditional after all. For all its features and flexibility KDE Plasma still kind of sucks at a few basic things such as changing the wallpaper. As a user, these minor annoyances might make you want to give up and switch back to something “better” but don’t do that just yet. KDE Plasma has a lot to offer, even things you’ve never seen before.

As I’ve said so many times in a previous article and possibly this one, launching apps and thus doing your work is not that difficult. So we’re not going to focus here on how to do those things, rather how you can adapt KDE Plasma to work with you, and also include some of the amazing KDE tools into your work style.

In this Article hide
1. Change the default Application Launcher and other widgets
2. Get familiar with Krunner
3. Enable virtual desktops
4. Spectacle
5. Desktop Sessions

Change the default Application Launcher and other widgets

By default, you get a Windows taskbar-like bottom panel with KDE Plasma. On the very left of the panel is the Application launcher button, where you’d usually find the Start button on a Windows machine.It actually looks quite modern and the apps are categorized into pre-defined categories. Easy, but do you really love the way it is?  Since you’re not the one assigning categories to apps it usually takes some time to get used to what’s where. Good thing it has a search feature. 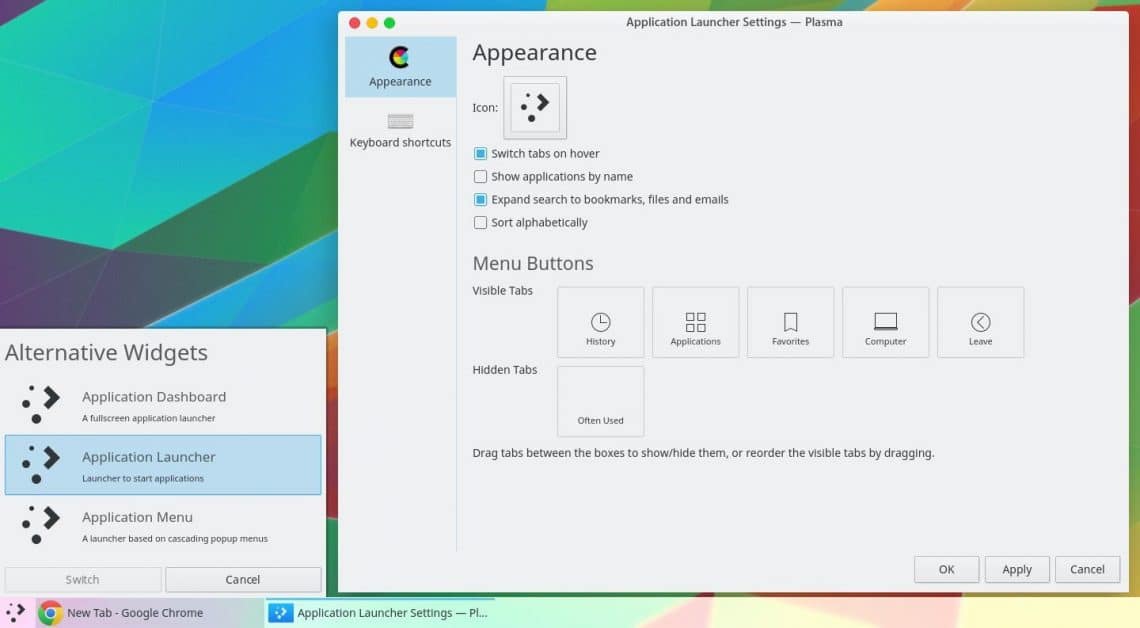 Get familiar with Krunner

If you’re going to be using KDE Krunner will be your best mate. You can trigger it by pressing Alt+F2 on your keyboard but a more convenient shortcut is Alt+Space. If you are on your desktop you can simply start typing on your keyboard and Krunner will automatically pick it up. Think of it as the spotlight on Mac systems, only more powerful. Of course, you can simply type the name of an application, file or folder to search for it. You can also type kill and then the name of the application to close it.

What’s 65 times 5? Type 65×5= and you’ll have your answer without opening a calculator. How much is $48.6 in Euros? Just type it and Krunner will convert it into different popular currencies for you. This also works for converting distances, temperatures, time, etc. from one unit to another. Just remember to type the metric value followed by the unit.

It even lets you open websites, bookmarks, searches your Kmail, plays music, videos, etc. The only complaint you could have is that it does not autocomplete, meaning you will have to type out the entire command. For example, to play a music file you’ll have to type out the full path before the name of the mp3 file along with the extension. So playing media files is perhaps not a realistic use case but everything else is. There are actually many more things to talk about but that’s going to take a while, perhaps sometime else in a dedicated article for Krunner.

Virtual Desktops are something many Windows users have recently been exposed to, but Linux has had it for several years. And if you’re used to working with multiple virtual desktops you might want to pull out your hair trying to figure out how to use them on KDE Plasma. Perhaps for better performance, the Plasma desktop, by default, has only one virtual desktop and you can’t simply add more. 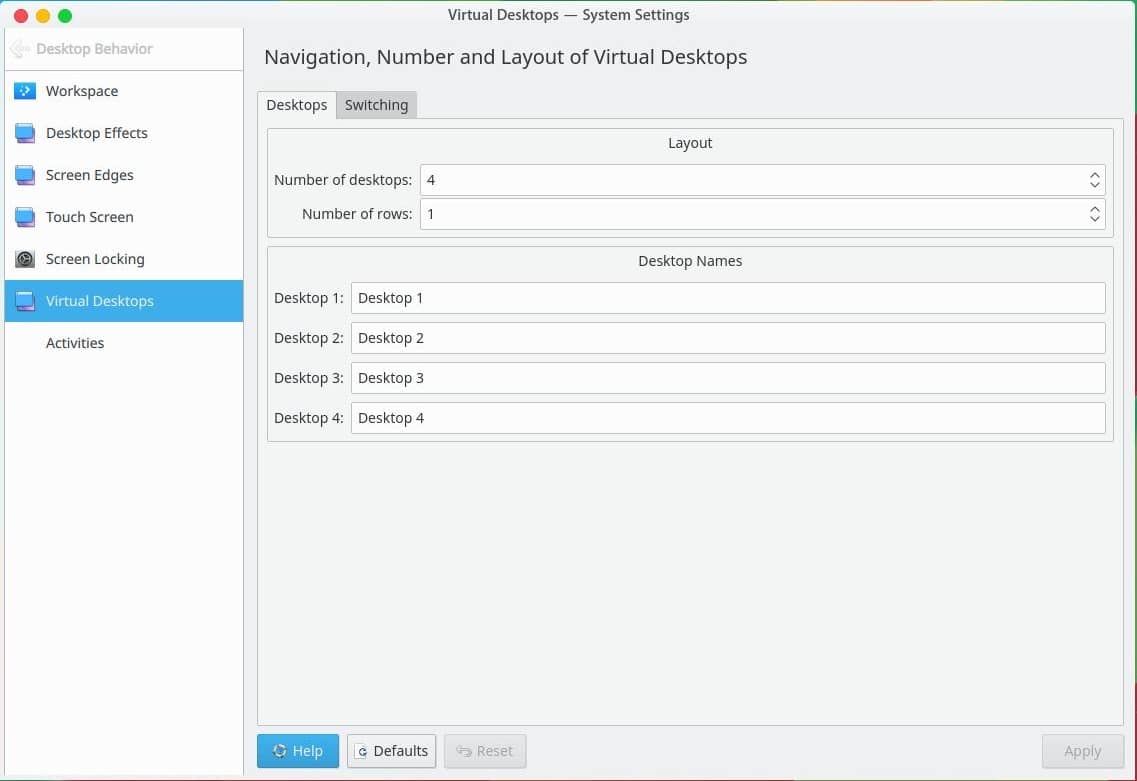 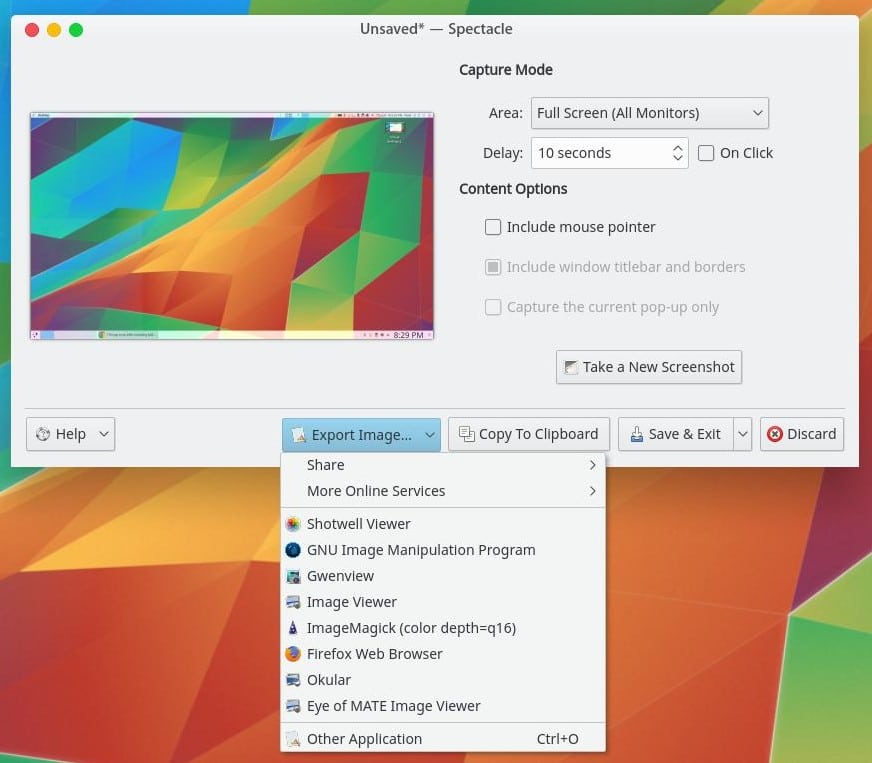 I, as you can guess, take a lot of screenshots. Many people take screenshots, in fact, probably not as often. Spectacle is the default screen capture tool that you get with the KDE Plasma desktop. You can directly save your screenshot in any image format you want by clicking on the downward arrow on the Save & Exit button. It also lets you open the image directly into any app or copy it to the clipboard without having to save it.

If you want to take a screenshot a menu or something that just disappears anytime you press a button or click somewhere, you can set a time in seconds and click Take a new screenshot. Open the menu and just wait. Clever right?

You can trigger Spectacle the old’ fashioned way by pressing the PrtSc button on your keyboard. Alternatively, you can just right-click on it in the Application menu/launcher and select Pin to task manager or Add to panel. While we’re at it, you might want to pin apps to the task manager rather than add them to panel as widgets because its easier to then unpin them. 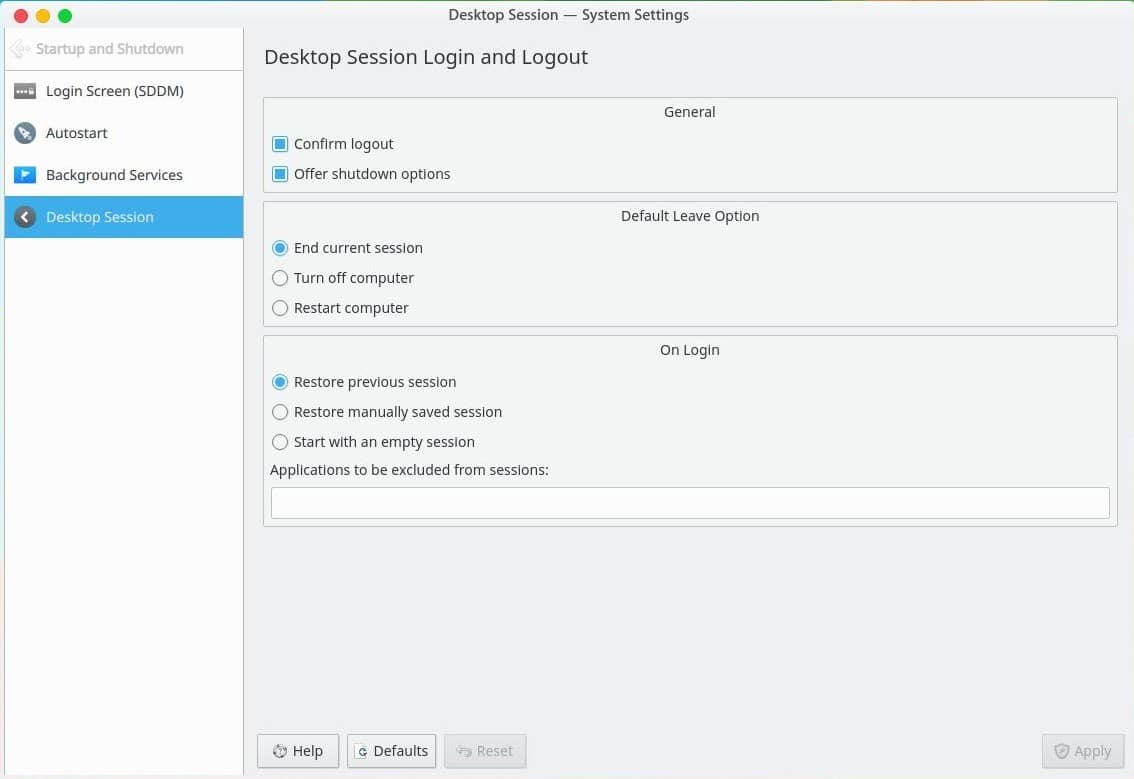 Without going into a lot of detail, because the article is already getting a little too long, it is one of the most wonderful features of the KDE Plasma desktop. When I said Plasma has “things you haven’t seen before” I was talking about this. Say you have a lot of tabs open in Chrome as you research about something, while you’re also writing a document, doing something else, using 3 to 4 virtual desktops. But for some reason you’ve got to log out and leave, you’d be devastated.

You may already have noticed this, in fact. KDE Plasma saves your entire login session when you shut down your PC. When you boot into your system again it restores your previous session. You can change this behavior in System Settings > Startup and Shutdown > Desktop Session.

There is clearly a lot more to explore around in Plasma, but these little things, I hope, will help you get familiar with it and enhance your work experience.